Excerpt from Ziona, Chapter 6
“You haven’t asked me, my Russian friend, nor have you, silent girl, but I will tell you anyway why I am helping you, you and my good friend Crazy Itzik.” He pulls a photograph out of a pocket hidden within the folds of his robe. It is tattered, with a complex branching crease in it like the veins of a palm. The crease passes through the chest of a thin, dark little boy of about eleven with a smooth oval face, like a childish version of Abu Marwan. The smile is similar too, a lopsided left-leaning curve, the lifting corners of the lips showing white, slightly crooked teeth. A white, open-necked shirt untucked enough to disclose a hairless chest. Before Abu Marwan opens his mouth I can guess what he is going to say, and I wish I could press my hands over my ears. I don’t want to empathize with him, can’t he see that? I’ve got no energy for anybody but Ma. But he has no pity, any more than Sasha did. Instead of the Siege of Leningrad, this time I get to hear about the riots that broke out during Unification, when the People’s Republic was proclaimed four and a half years ago. To us prisoners within the wire it was just more shooting outside; what difference could it possibly make? Out here, it was apparently the next thing to the apocalypse.
“A bunch of boys threw rocks at the soldiers, put sugar in the gas tanks of their APCs, dipped the People’s Republic’s flag in the latrine at night and ran it back up the flagpole, all that sort of rubbish. If I’d have known about it I would have given them all a good thrashing, something to remember me by. Oh yes, I’d have used my belt on their nationalist backsides. Left them with a few nice red welts, too. But they were clever, too clever for me anyhow. Guess they thought Musa Abu Marwan, late paramedic in the British Army, was their biggest enemy.” Shut up, I think, shut up already! But he is relentless. “Did you know they had a grand name for their stupid schoolboy pranks? Did they teach you about it in KGB school, or was it all by-the-book Marxism, dying classes that must be disposed of and so forth?” Sasha says nothing. “Intifada, they called it. Means ‘dusting off.’ They were going to wipe the occupiers off our land like so much dust.” I’ve read the word Ha! in Ma’s English books, but I never did understand what it had to do with laughter. Certainly the terrifying bark Abu Marwan makes now has no humor in it.
“Sixteen boys they took. Nine from this village and seven from the one down the road. The oldest was seventeen years old. Mahmoud was only twelve. They took them at gunpoint. Told them they were going to dig ditches outside town. Which they did. Just deep enough to hold their bodies. Two of them were left alive to shovel dirt on the rest, and to tell the tale. One of them was Bashar, Abdullah’s son from the next village. He sits in his father’s house all day staring at the walls. The other survivor was Hasan, my nephew—he’ll take you to the Hashemites, Allah grant they have mercy on you.”
Posted by Martin Berman-Gorvine at 8:20 AM No comments:

Ziona is Now on Sale! 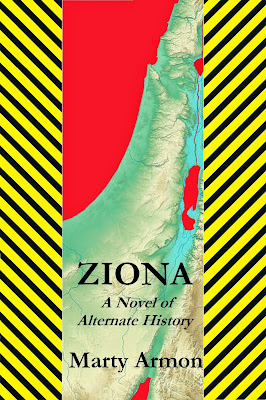 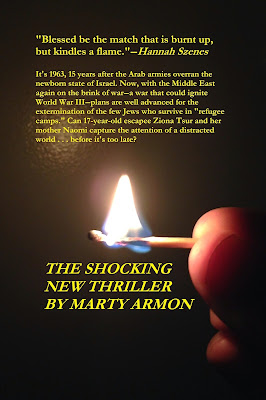 Posted by Martin Berman-Gorvine at 7:39 AM No comments: